The first European Qualifier for the Quake World Championship duel tournament commenced earlier today. Some 500 players competed against each other in hopes of making their way into the next phase of this road which ends at QuakeCon and a lot of money. Today's qualifier saw the field whittled down to sixteen (16) players with only eight (8) of which will qualify for the next phase, the regional qualifiers. Today's qualifier included notable names such as cypher, toxjq, Vo0, cooller, and many more of the best players from their respective Quake discipline.

The admins here have been doing an amazing job at logging all the results to Plus Foward, all which is available on the Tournament Hub. We have also updated our Duel Rankings.

Match of the Day

Today's match of the day was definitely Vo0 vs. fazz (match page) as the two Anarki mains scraped it out over a full three maps. Before the game started I would have imagined fazz to be the favorite to win as he has been playing a lot, especially in contrast to Vo0 who I didn't even realize was interested in the game. The series had its fair share of OMG moments, as well as some friendly back and forth.

The game started on a timid note as both players eluded each other on Blood Covenant, constantly engaging just long enough to release a rail at the enemy and then back up. They split the two major items for a while however the Swedish player ended up scoring a critical telefrag which seemed to garner winning momentum on the map. Vo0 did have one spectacular round on the first map, but it was mostly all fazz. The tone of this series shifted once Vo0 voted in the much smaller (and crucially, rail free) Corrupted Keep. Pushing the pace with his Anarki he was able to bully his opponent and quickly convert spawn frags. In a bit of a surprise he picked Clutch to counter fazz's Nyx, and it paid off big time as he punished the much weaker champion. The final map was on Ruins of Sarnath, and after a lot of shuffling around the map and between the two major items Vo0 was able to end the series with a rocket jump to mid air combo. It was an enjoyable series which showed some of the strengths of the new duel format.

So this is who's left. Sadly half of these guys will be forced to run through the gauntlet all over again in the second European Duel Qualifier. These games are currently scheduled to be played at 10:00 UTC, 02 Jul 2017 and will be streamed on

Quake Champions. Check out their match pages for details and to make your predictions.

I have to admit I'm surprised to see a few names here as I would not have expected xron, HELL or Zoot to have had a fighting chance of making it this far. Sadly I' think they're all about to be reset and forced to play in the next qualifier, but well done to these guys for beating out some very tough competition. The most striking thing about these players is, who is Luminus? I'm not exactly familiar with the Quake Live scene but from the games, tournaments, and events I have followed, I have never seen his name come up. Could fresh-blood be ready to challenge the veterans already?

Speaking of veterans, I don't imagine that neither strenx or Nitrino are particularly happy to be facing each other at this stage. Both players will make it to the regional qualifier but unfortunately one of them is going have to do it through one of the other online qualifiers. This will definitely be the match to watch for the upcoming round.

Event VODs
15 Comments
Reply to topic
Anonymous (46.245.147.6)
Luminus is a quite young and very good german TDM player and had roughly a QL duel ELO peak at 2000 (maybe more, don't know exactly).
cooke
Couple of VODs: https://goo.gl/jzry1b. Tried to stream the ones, who wasn't on official channel.
3
Anonymous (93.194.72.143)
there's a minor typo: it is wichtL
xou
Fixed!
cha0z_
Great overview! :)
xero
Thank you :) Let's see what day two brings us.
1
writhe
idk why anyone would count Vo0 out ever. One of the few top players that doesn't play like a pussy. His style works out much better in CPMA / Reflex so I think he will wreak havoc on this game
1
KillaloT
Just really shows how great potential this game has (don't screw it up id/bethesda). Having every style of Quake, and balancing them so that they are all equally well... really looking forward to see this game evolve the next few months.
mdv
when do we get proper casters for the eu tournament?
xero
EU casters are great! I'm really digging K+M :)
1
cityy
Their casting is really good but I'm having a hard time taking them serious.
xero
Why? They're one of the few Quake casters with a good voice for calling exciting plays. 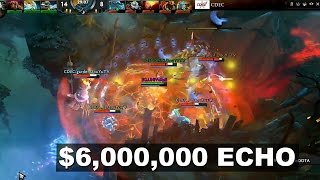