Quake Champions is a frenetic test of skill and the ultimate competitive game. The purest form of this proving ground is Duel mode, a 1-v-1 showdown to decide who is best, once-and-for-all. 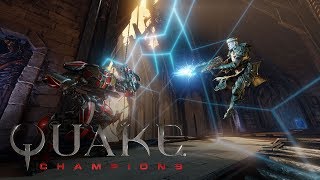 Duel mode introduces an additional layer of strategy to Quake Champions, incorporating multiple Champions with differing Abilities. To start, players will select three Champions in a snake-style draft before heading to the Arenas. In choosing their roster, players will have to consider which Champions are better suited to their unique playstyle and which are effective counters to their opponents’ choices.

The Quake Champions Large Scale Test Tech is now live and will run until May 21. The Tech Test is welcoming all players and includes Duel mode as well as the new team-based competitive mode, Sacrifice. Players who want to join in the fragfest can head to Quake.com to sign up and receive a key.

Source: Bethesda.net
4 Comments
Reply to topic
Lonsfor
they really dont know how to make good trailers
neeple
The duel mode needs an awful lot of work, and this trailer makes it seem like they are happy with the format and are going to stick with it.

Making duel easier wont make it popular, but it will make it a lot less interesting. Deep and interesting games are the ones that live on for decades.