The russian youtube channel C-c-combo Breaker! has just released a video about their recent visit to the id offices which gives us a first look at the Duel mode of Quake Champions.

The breakdown on how Duel works:
Apparently C-c-combo Breaker! also got to see other unannounced Champions but are not allowed to share them with us until E3. So we can all look forward to new Champions being made public at the Bethesda E3 show. C-c-combo Breaker! also got to test a second game mode though they did not mention what it is called nor do they show it in the video.

A full duel match between SyncError and ZeRo4 can be seen in the video starting at around 6m20s. 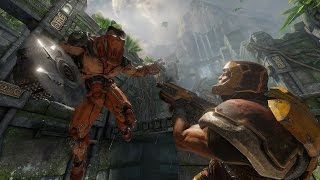 C-c-combo Breaker!
46 Comments
Reply to topic
nvc
oO
3
noctis
Chances are high that if you have not bought the game you will first need to unlock 2 extra champions to be able to play Duel. Which sounds good because it prevents new players from playing a mode they have no business playing until they understand the game anyway.
12
squadmeta
this is the best idea ever
Anonymous (85.5.33.199)
Did they say, that they're allowed to share this early? Seems weird to "reveal" this in a russian video... Seems like they're fucking id by cashing in on the reveal.
goulox
it's not weird at all. the russian community of quake players is huge. Maybe it's currently the most active country in quakelive...
3
atomigo
Help me new UT, you are my only hope.
1
Qvist
I think it sounds interesting but I've never cared much about duel. I wonder how long an average match will be, you could always change the number of heroes per round I guess.

One problem I see is that there's only one champion with crouch slide and one with aircontrol so far. People who are good at those types of movement will have to switch movement type three times during a match. People who prefer QL-movement can play three champions with that type of movement.
Anonymous (212.237.134.131)
It's not like those people don't know how to play with common Quake movement.
1
GEKKO
Am I to understand that a round lasts until a player dies, and then the next round starts with new hero picks? So a duel effectively become bo3 frags?
noctis
I really thought i made it clear :/

A round lasts until one guy has 3 frags (killed all champions of the other guy), there are no resets inbetween, the reset happens once the round is over.
A map lasts until one guy has won 2 rounds.
GEKKO
Okay I understand now then. Thanks!
Lonsfor
So a round is a bo5 frags and a game is a bo3 rounds.
pacman
Can I uninstall the game already?
2
noctis
I don't think anyone is preventing you from doing so. :)
4
abso
Diabotical plzz faaassst!!!!
Magikarp
Guess it's time to pray for Diabotical.
3
Miles
Almost exactly what I hoped it wouldn't include. Maybe it'll be fun -- praying they prove me wrong.
sonBANG
wow, how incredibly boring. 5 mins to get a few frags followed by idle time, repeat. then consider the lack of depth (compared to classic duel or even ca) and it looks like you got a blunder. oh boy...
2
cobba
Lack of depth? Can you explain?
Insaccato
Zero4 is eating more donuts now that he is an id employee
4
cityy
Don't get all the crying over this. The general concept sounds very interesting. That it needs testing and could potentially be nerved in terms of time limit or frags required per champion to win a round is another story but these are just variables to change.
5
Anonymous (79.27.241.78)
You say that just because you are id moderator?
2
Anhedonic
'either you agree with me or you're a paid shill!'

(c) anon
3
cityy
I say that because I believe in constructive beta testing.
1
xero
What sort of impact do you think will have on map design? Do you think traditional duel maps will work?
cityy
I think the initial spawns topic is going to be highly interesting considering how many issues have been with that in QL. Generally, anything about the core mechanics will just matter more if rounds are decided by three frags - respawns too, especially if the chance to use certain champions/abilities is directly linked to that. I don't think they will stick to three frags long term though - wouldn't be surprised to see that pushed to 3-5 frags per champion to balance out things like spawns just a little and to enable some sort of game flow.

Regarding maps, I think traditional maps will work, most of them at least. Thought it depends on how many of those cooldown items you throw into them. Ideally, it should be timeable when your opponent can use his ability again. Maybe it should even be public info for both players on the hud.
I can defenitely imagine some maps favoring certain champions over others. I imagine ranger's orb would be less useful on Aerowalk than on Bloodrun for instance just because of the way areas are connected in those maps. Also obviously you could feature ramp jumps and other movement abilities like wall jumps.
4
kubix
So they turned duel into a 3-champs bo3 hoony mode. I hope sacrifice is worth.
1
vidje
reminds me of wickland
Anhedonic
So when is duel coming over?
xou
That won't be a lot of frags for video makers
4
h4t3
haha :]
fnx
hope we can try this in the next beta :D
Anonymous (82.136.82.239)
*mooortall kooombattt!!!*

iDiots..
IVSTINVS
I see they ruined duel
2
lemming
Don't need Duel. The team mode needs to work :)
1
Anonymous (110.174.218.47)
This does seem like it would make for short frag lacking duels. One way to help it imo would be to have the hero switch set so that it can only happen after death AFTER a set time period ie. 3:20.
mojo
This mode was designed to make mojo a world champion. I could always get a good start but had trouble maintaining leads. That isn't an issue anymore.

IM GONNA BE WORLD CHAMP
1
mickzerofive
interesting concept can't wait to see it played by high level players (looking at you sync). Hope that spawn killing isn't a major factor
Anonymous (60.242.140.148)
Interesting idea... can see how they would have landed on it. Need to make duel more spectator friendly and welcoming for norms. Though there will have to be a "time limit" mode or a "3 lives per champion" mode or I don't see this lasting long at all.
Anonymous (83.131.248.158)
No1 cares about duel anyways...

Best regards, Makie
Zebrazilla
Was worried when reading/hearing about it. Seeing the video however makes me quite excited about it actually.
Anonymous (86.126.35.48)
Worst idea ever, won't buy it if I can't play with only one champion duel.Period.
1
Anonymous (188.225.185.210)
so, basically its a duel with fraglimit 6?
Anonymous (91.233.116.228)
7 dmg LG. Bought. Played until /ragequit and /uninstall. Holo
Pharaphobia
It will be f2p so you can ragequit withut spending cash :]
jackerl
I think this duel mode could work out pretty good IF this is just for public servers. According to the full video posted on ESR sync even won a game against Zero4. This is something that would never happen in classic Quake duel. But in order to have a big playerbase, which is the key factor to have a successful e-sport title imo, it is important to somehow guarantee casual players an average winning rate of around 50%. What I´ve seen in the two duel videos seems to work into that direction.

Ofcourse this needs to be backed up by a competetive duel mode.
Calendar
Premier Major Minor
OngoingUpcoming
QPL3 Regular Season